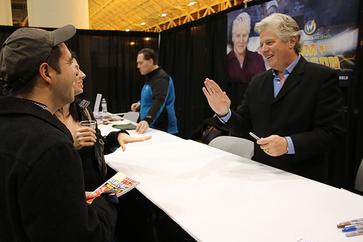 Wilson and fans discuss the Back to the Future films at Wizard World New Orleans 2017.

Tom Wilson is an actor and comedian who is probably best-known for playing the many versions of Biff Tannen in the Back to the Future film series. Wilson has also played numerous roles in film and television, spent years as a stand-up comedian, and has quite an extensive list of voice-over credits from animation and video games. Wilson is a special guest at the Wizard World Comic Con in New Orleans this weekend and I got the chance to talk with him about his work and most famous role.


Nerdmost: What do you think keeps fans coming back to Back to the Future?

Tom Wilson: I’m amazed that Back to the Future was made in the 80’s, but no one had thought in all of the time travel stories and movies of a story where you meet your mom and dad. I think that is such a universal hook. It grabs people by the head and by the heart.

I mean, what if you went back in time to their high school and met mom and dad when they were your age? That would be fun…oh! Wait a minute! I’ve messed it up cause now my mom likes me. I mean, it’s such a good story that I’m amazed somebody didn’t think of it before.

I think it’s got that universal appeal. It’s a family story with a time machine in it, and it really just caught people.

NM: Is there any particular aspect of the series that you most enjoyed?

TW: I grew up in Philadelphia, so to get the chance to act in a big western was amazing. To learn quick-draw and gun play with Arvo Ojala, a legendary quick-draw expert, to learn horseback riding with Corky Randall who rode with John Wayne, and to do my own stunts, it was just unbelievable, especially in an age when big westerns like that just weren’t being made.

I was able to get out there and ride on horses in the mountains of California and do all that stuff, to walk into a saloon, push open the doors and have everyone clear out just because I walked in the saloon. That stuff just doesn’t happen in movies anymore. So to be able to do all that was a great thrill.

NM: You played Biff at multiple times in his life (along with his kid and his ancestor). Did you approach each version as the same character or were they different characters to you?

It was interesting exercise in difference and subtlety. I tried to make them the same, but just a little bit different from each other. I took on everything from vocally being different to literally the way I was holding my jaw being different. It was an interesting challenge, because, yes, you have to make it different…but not that much different.

NM: You’ve done a lot of voiceover in your career. Does that require different things from you as an actor, as opposed to acting on camera?

TW: Well it offers me a bigger freedom with improvisation, but it depends on the show. On some shows, while the actors are all in the room together you can just go wild in animation. You’ll do one take that is “Okay, we’ll do the script.” Then we’ll do one that is a little looser. OK, we’ve got both of those, now just go crazy. And if you come up with something funny, it changes the whole thing. That is really a thrill to me. And of course it let’s me work near home and you get free snacks!

TW: Wow, you’re going way back. I haven’t brought a tuba on stage since I think 1991. It was a lot of fun. I mean, I played the tuba and then I started doing stand-up and it’s right there. I mean, I have a tuba in my room so I’ll take it down to the club and play it. Ended up playing it on the Tonight Show.

NM: I loved that bit. I was a band geek in high school, trombone, so seeing you play the tuba on Carson was hilarious to me.

TW: I had a sense that you were a lower brass player. But I didn’t know that you gave up at trombone. Couldn’t make it over the trombone hump all the way to a real instrument like the tuba. But we band nerds must stick together.

NM: Well, thanks for taking the time to talk with me today. I really enjoyed it.

TW: So did I actually. It was my pleasure.

If you’re curious about the tuba, here’s a link to a YouTube video of his Tonight Show appearance from November, 1989: https://youtu.be/PR_hh8ong_k