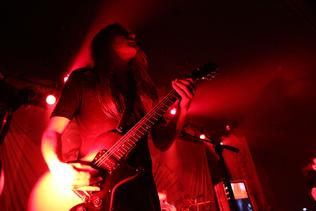 Before the opening show of the new US tour featuring CARCASS, Deafheaven, and Inter Amra, we talk with guitarist Bill Steer in the back of CARCASS’s tour bus. Bill sips some tea under a ceiling covered in flame shaped mirrors while we talk about metal, touring, and the Deep South.

NerdMost: You are embarking on a new tour, but you guys have been on the road for quite a while now. What’s the best thing about touring for you?

Bill Steer: I just think we are lucky to be out here. You know there has to be enough interest to support a tour. So for us to be out here doing this is great. When we were doing Surgical Steel, it was more a case of stopping rather than starting. We could’ve gone on and done a whole other album. It was such an energetic fun time writing that material…we had too much already. We had like 15 songs.

NM: Any chance we’ll here any new material on this tour?

Bill Steer: At this stage definitely not. Dan [Wilding] and myself, we’ve played some new tunes in the early stages. I mean, we started doing that in early 2015. We just genuinely didn’t realize how much more touring Jeff had in mind.

We thought “OK, it’s been two years. That’s enough. Let’s get to work on the new record.” And Jeff was just on a different page entirely.

Eventually we realized what he was doing because the U.S.A. is massive and we’d hardly touched it. Just because we’ve done one or two tours, it’s not like we’ve covered the whole place.

I think the other thing that was in the back of Jeff’s mind was if we came back rapidly with another record, no matter how good it was, there’s no way it would be taken seriously.  We’re still kind of dealing with the aftermath of Surgical Steel. But it definitely feels like time now though. There’s just no way we could play any of this material live. It’s just in the early stages.

NM: You’re starting the tour in the Deep South, in Baton Rouge. Any connection for you here?

Bill Steer: As a music fan, it’s brilliant to be in this part of the world…the source of everything, you know? Whatever element your looking at Blues, Jazz, anything…it traces back to this part of the U.S.A. It’s magical for us.

Being in a place like Louisiana or Alabama is rare for a band like us. You don’t always get to play these places. You can do a month or six weeks in the U.S. and not even touch them, so we’re so chuffed to be here. But there’s probably very little we’re actually going to be able to see in reality. It’s a very different thing being on a tour bus and having an agenda. Wandering the nation at your own pace you can really meet some interesting people.

NM: On this tour you guys are with Inter Arma and Deafheaven. You guys are all from very different subsets of metal. Was that intentional?

Bill Steer: I’m sure between Jeff and our agents, it was their intention. They think quite carefully when they’re putting together these packages. There has to be a reason for everyone on the bill. They’ve got to be bringing something to the table.

Deafheaven is a fairly controversial act. Some people love them and others just don’t know what they’re doing. Jeff loves that. He thrives on that kind of controversy. He’d have been fighting in their corner for sure. Not that they need anyone fighting for them cause they’re doing quite well.

It’s an area I don’t know much about, to be honest. If you had to name two genres that I’ve never really dabbled with, it would be: Black Metal and Shoegaze…and they kind of cover both of those.

We did a gig with them a little while back and they seem like really nice people. You think they’d be more aloof and arty, because of the sound of the band, but they’re actually very nice.

NM: When you’re on tour do you listen to the other bands?

Bill Steer: Definitely. You have to do that. If you want to get a feel for how the room is, then you’ve go to go out there and listen to the other bands.

You always learn from watching a band anyway, whether it’s a positive or a negative. I always think you get something off it. It might be like “I love what the bass player’s doing,” or “I’m never going to do that thing he just did.” There’s always something you take away from watching a band.

I never get sick of watching live music. Some of the bands we play with on tours I watch them play night after night and really get off on it. There’s some bands I really enjoy watching live that I’d never listen to. The live experience is fully 3-D, while at home it’s very two dimensional and it’s got to be your thing, music that you directly relate to.

NM: I’ve heard you describe CARCASS’s sound as very dense. Does that translate well live or do you feel that it has a different sound live than in the studio?

Bill Steer: It’s gonna be looser. That’s a fact. I think through, it's closer with us than it would be for many bands because we record in a fairly organic way. There’s no “click-track” so the drums aren’t on a grid. And there is some ebb and flow to the grooves with no metronome against it. It’s not static. That’s exactly what we wanted and it's very much like that live.

I would pursue the same kind of path with the next record, if we do one. I’m really not up for that pursuit of perfection. To me, a beautiful moment in music with flaws – that is perfection. It’s a feel thing. If it feels good and you don’t think it can be surpassed, then just let it be.

NM: This line-up of CARCASS has been together for a while now. Does it have a different feel than previous incarnations?

Bill Steer: Oh yes, definitely. Every time you have a different drummer you’ve entered a new universe. That’s a lot of fun.

Ken Owen was really not an orthodox drummer. He was doing stuff that really pushed the boundaries of his ability straight from the off, but then he would shy away from anything he considered basic.

With Dan Wilding, what I love about that guy is he’s definitely got some swing and some groove to his playing. There’s lots of very, very scary technicians out there in the drum world. We weren’t particularly interested in that. I mean, obviously he can play. He’s got killer chops and his fills are ridiculous, but when he plays does it have some bounce to it? He’s definitely that guy.

NM: His drum kit is pretty minimal. Does that speak to his attitude as a drummer?

Bill Steer: Yeah, I think so and we definitely encouraged it. Even just from a practical thing, like rehearsals, the guy can get ready quite quickly. In the past after rehearsal, it was just Ken gathering his drums up. It’s such a lengthy enterprise.

But really it's about whatever he’s comfortable with. Generally, I think we’d rather have the backline on the minimal side.

You’ll notice we don’t have stacks. In our case it would be phony. I never use the top cabinet. I find that sound annoying, it's just too close. Why would we bring those extra cabinets if it's just for show. Because we have the bottom ones and the amps are turned up quite loud. And there’s ambient sound coming from the floor.

NM: You guys have a lot of side bands: Firebird, Gentlemans Pistols, Brujeria, Jeff’s solo stuff. Were those just gap fills while CARCASS was broken up or are they just cooled off for now but you may revisit later?

Bill Steer: Oh yeah, yeah. I can’t speak for Jeff, but for me I was just exploring. It was just something I really wanted to do and I didn’t necessarily know how to. You just have to go out there and make a few mistakes. Sort of learn on the way. Then by the time you feel like you’ve learned everything, it’s time to break the band up.

I had a lot of fun doing it, but it was just awkward because at one time I was in four groups. I was in CARCASS, I was doing Angel Witch, and I was in Gentlemans Pistols and Firebird. Eventually one of them had to go because of the scheduling and Firebird is the one that had the least happening. So I dropped out. Eventually we had some date clashes with Angel Witch, so I had to leave them, too. It was a shame, but we managed to anticipate it before it became a problem.

Now I’m just playing with CARCASS and Gentlemans Pistols, which is more than enough for the time being.

CARCASS, Deafheaven, and Inter Arma are currently on tour in the US through November, 30, 2016.